The real-life pet store that was located not far from Central Junior High School was one of my favorite places to hangout and learn about animals. The interior ambiance was much as I describe in Grant's Pet Shop in Key West. But instead of the wandering turtle, the sisters that ran the shop in Lawrence were known for the alligator that had the run of the store. 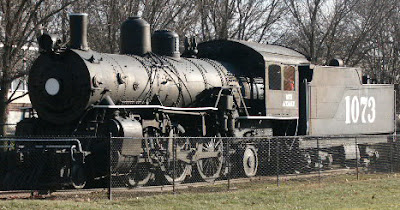 The fictional locomotive engine located in MacArthur Park in Key West serves as a key spiritual power spot and connecting link in the story to a real engine residing in Watson (Central) Park in Lawrence. When I was a child growing up in Lawrence, I loved to play on the old engine 1073. Back in those days, it was easy to sneak on board when the adults weren't looking.

Before we moved from Sharon Springs to Lawrence

On calm, wind-free nights at my Grandparents' farm in Western Kansas, I could hear the train coming from miles away. clicking and clacking down the track--embedding the rhythm into my dreams.

The Dam on the  Kaw 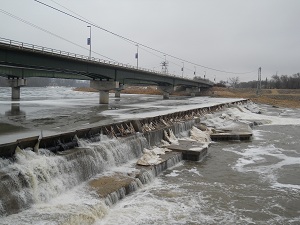 This bridge over the Bowerstock Dam on the Kansas River leads past the paper factory  to North Lawrence where my mother was a teacher and I attended attended Woodlawn Lincoln. Several years later, both of my parents became professors at K.U. in the education department and I attended Lawrence High and graduated from K.U.

In TDE, the dam is the home and workplace for Albert who camped beside the dam and noodled for catfish...and where he met 'Mistah Big'.